What Bobtailing is & How it Could Cause a Truck Accident

What is bobtailing and can it be dangerous?

Bobtailing is when a semi-truck is driving on the road without a trailer. This is something that happens whenever drivers are on the way to pick up a load and they don’t have anything that they can transport to that location with them.

Is bobtailing dangerous? It can be. And, because it creates driving conditions that are very different from what a loaded semi-truck experiences, it can cause drivers to make errors that lead to accidents. Since semi-trucks are larger and heavier than passenger cars, anytime they’re involved in an accident, the potential for serious injuries or worse is very high.

Fortunately, bobtailing is the exception and not the rule for truck drivers. Since driving a semi-truck without a load is a waste of time and money, it only happens when absolutely necessary.

The other good news is that drivers have training on how to drive when bobtailing. Plus, they learn how to expect their truck to handle differently. Does this stop all accidents? No, but it does make an impact and any impact that reduces semi-truck accidents is a good thing.

What is Bobtailing and How Does it Change The Way a Sem-Truck Handles?

When a semi-truck doesn’t have a trailer, most of its weight is on its front wheels. Trucks are designed specifically in this manner. Primarily, so that when they have a heavy trailer on, the weight is counterbalanced.

The problem is that when a truck has no trailer, there’s a lot of weight on the front tires without much on the rear tires. That makes handling the truck challenging. Plus, it handles very differently from how it would if it were loaded with a trailer.

The main issue when bobtailing is that a truck cannot brake as hard since the rear wheels will not have as much traction. That means that a bobtailing truck will require more distance to come to a stop which increases the chance of an accident if a driver isn’t careful.

Emergency Maneuvers in a Bobtailing Truck are More Difficult to Perform

When a truck is bobtailing, hard braking and swerving should be avoided. This is because doing either of these things can cause a truck to swerve and lose control. The problem is that swerving and hard braking are exactly what truck drivers have to perform if they are in an emergency situation.

For example, if a truck is cut off in traffic by a car and that car hits its brakes, then the truck driver has to hit his brakes hard as well. But, if that truck is bobtailing, then the very act of hard braking could result in an accident.

Being Aware of The Dangers of Bobtailing Can Help Prevent Accidents

Truck drivers already understand the dangers involved in bobtailing. If more car drivers were aware of the dangers, then they could drive more defensively around trucks that are bobtailing. This would make the roads safer for everyone.

How Driver Fatigue Can Lead to a Semi Truck Accident

With more than 2 million semi-trucks transporting goods throughout the U.S. every year, there are going to be many accidents. The results of such accidents can be truly devastating for those involved. The causes of these accidents are many. Therefore, we’re going to take a look at how driver fatigue plays a crucial role in semi-truck accidents.

Driver performance is significantly affected by lack of sleep. The more drowsy the driver is, the worse their reaction times are and their hazard awareness is also diminished. It’s also more difficult to keep your attention on the road when tired.

The effect lack of sleep produces, has been compared to driving while over the federal blood alcohol content limit. Therefore, if you’re driving when you haven’t slept for 20 hours or more, it’s the equivalent of a 0.08 percent blood alcohol concentration. This is the federal legal limit and shows how dangerous drowsiness can be on driver performance.

Truck drivers are restricted in the hours they are allowed to work. The Federal Motor Carrier Safety Administration (FMCSA), which is part of the Department of Transportation, oversees the hours of service regulations. This limits truck drivers to 70 hours over 8 consecutive working days.

Drivers can also not operate their trucks for more than 11 consecutive hours. Despite these rules, the pressure drivers often face can leave them suffering fatigue.

Drowsiness could play a part in all four of these categories. The study concluded that the two major factors which contribute to these accidents were fatigue and the demands on the driver which require them to hit deadlines. These problems, when added to other issues like weather conditions or experience, significantly added to the likelihood of a crash occurring.

Fatigue was directly responsible for 13 percent of accidents. It could have contributed to many more accident types, however. Like, traveling too fast, inattention, distractions, and inadequate surveillance.

While it’s possible to check blood alcohol content, there isn’t a test for driver fatigue. This means that the problem is likely to be significantly larger than people understand.

Are You Too Tired?

It’s important to realize when you’re suffering from fatigue before you find yourself in a situation where you need a good lawyer. If you’re struggling to keep your eyes open or frequently yawning, these are obvious signs which shouldn’t be ignored.

There are more subtle signs that lack of sleep is affecting your performance, like not being able to remember the last few miles. If you miss turnings or have problems maintaining your speed, it’s better to get your semi-truck off the road.

Don’t let the demands of the job cause something to happen which you will regret forever.

Truck driver fatigue laws were enacted to help prevent one of the major causes of truck accidents, tired drivers. Anybody who has ever gone on a long drive can probably tell you that it’s very easy to get tired on the road. After driving, mile after mile, highway hypnosis can set it in.

When this happens, your brain doesn’t work as well as it does normally. In fact, your brain functions in a manner closely resembling someone who is asleep. [1] Delayed reaction times and feeling like you are in a haze, is a recipe for disaster when you’re on the road.

However, when you happen to be behind the wheel of a semi-truck carrying a huge load, the danger is only magnified further.

What Are Truck Driver Fatigue Laws?

How Do These Laws Prevent Accidents?

Is it possible to prevent all accidents? No, but any reduction you can make means lives and property saved. Did you know that 13% of commercial truck drivers involved in an accident were found to be fatigued when the accident occurred? [3]

Truck driver fatigue laws recognize the huge role that fatigue often plays in accidents. These laws force drivers to get enough rest to safely operate their trucks. When someone drives a semi-truck for a living, they are under pressure to make deadlines.

Each mile on the road means more money on their paycheck, so obviously drivers will want to push their limits. They are going to convince themselves that they are fine. Therefore, they keep driving when in reality fatigue is becoming an issue.

Since there are substantial penalties for failing to comply with driver fatigue laws, both businesses and drivers are incentivized to not break the rules. When pushing yourself beyond your limits is no longer possible, it takes the risk of drivers trying to do too much out of the equation.

Violating driver fatigue laws penalizes drivers so the financial incentive for driving when they are very fatigued goes away. Without that incentive, and with fear of the penalties, drivers usually obey all fatigue laws which makes the roads safer for everyone. 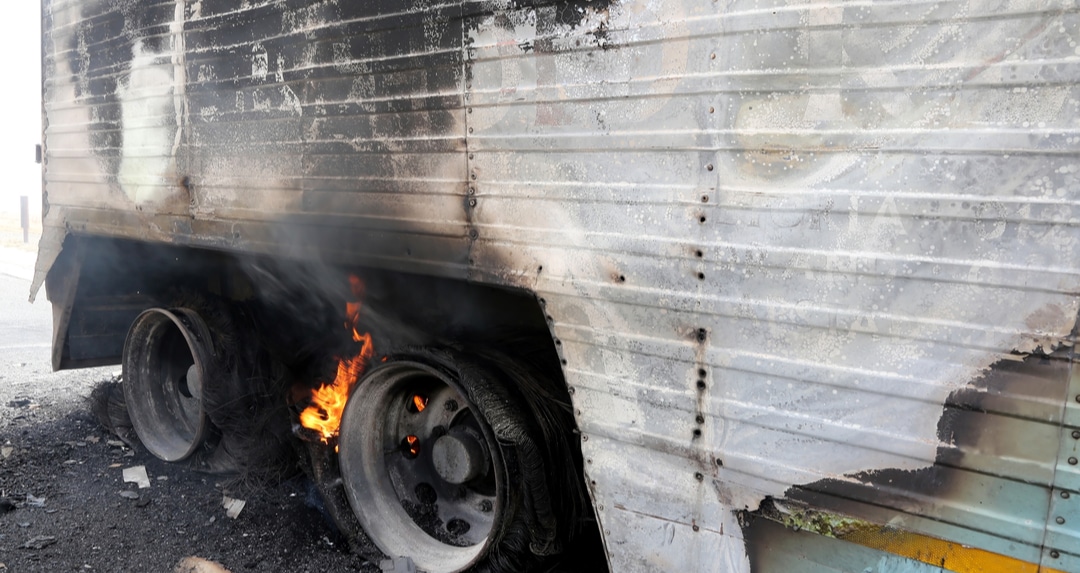 Can brake problems in a semi-truck contribute to or cause an accident? Absolutely. The brakes on vehicles are there to allow drivers to control their speed and to stop. If something goes wrong with the brake system of any car, then the chances of an accident happening go up dramatically.

This is a big part of why companies that operate semi-trucks invest so much time and money into properly maintaining them. Not only do they care about the safety of their drivers and of the public, but they also care about the possibility that they could be sued for negligence if they don’t keep up with maintenance on their trucks.

One of the reasons that brake problems are such an issue with semi-trucks has to do with their size. A passenger vehicle will, on average, take about 316 feet to come to a complete stop once the driver recognizes the need to do so and applies the brakes. A semi-truck will take on average 525 feet under the same circumstances [4].

What causes semi-trucks to require a longer stopping distance? It’s a matter of physics. Semi-trucks are many times the mass of passenger vehicles. When you have that much mass traveling at a high rate of speed, it’s going to take a long time to slow down.

Semi-trucks utilize more powerful brakes than passenger cars. And, if they receive proper maintenance, then they should help a semi-truck to come to a stop fairly quickly. But, if they fail? That’s another story entirely.

Many people aren’t aware of the fact that modern semi-trucks are equipped with onboard computers that record data about their operation. This is all part of the trucking industry’s regulations that are in place to help keep us safe.

These computers record data that can be analyzed following an accident to determine the cause of the accident. This data can be incredibly useful to anyone that was hit by a semi-truck since it can help to determine what caused the accident and who was at fault.

Never talk to the insurance company for the trucking company. Their job is to try to mitigate the cost by offering you as low a settlement as possible. They will try to deceive you and you may not even realize that you are being taken advantage of. So, if you are the victim of an accident with a semi-truck, do the smart thing and call a lawyer.

Tell us a little about your case using the form below and one of our personal injury lawyers will review it, for free, within one business day.

Have you suffered a car accident? Want to know what your case is worth? Every case is unique, and our accident settlement calculator will give you an estimation of your settlement amount

Find Out What Your Case Is Worth

Are You Sure You Don't Want FREE Legal Advice For Your Case?

We're ready to work hard and win your case. Remember, it costs you